Sometimes StreetNoise Orchestra plays for purposes that are particularly close to our hearts. For these actions, we head into downtown with our instruments in hand and a cause on our minds. We prop up an instrument case open to the public, drop in some flyers with information about the cause. We use our lively tunes to gather a crowd and let them know why we're there. We'll repeat this at several locations until our mouths are swollen and fingers sore.

June 6th, 2020, a Saturday that was supposed to be rainy, but the sun nevertheless could not be scared out of the sky, was such a day. We played in the Innsbruck city center, asking for donations for the women's shelters in Tyrol. 100% of the proceeds were donated directly to Frauenhaus Tirol.

In 2019, the Women's shelter in Tyrol housed 75 women with 43 children, and an additional 11 women with 18 children were housed in temporary apartments. However, there were another 70 women on the waiting list with 34 children who could not be housed due to lack of space. The need far exceeds the capacity and it is clear that more funding is needed to provide protection and help to all women who need it. For many years, politicians have failed to provide the necessary resources for this.

Violence against women is not a new topic. The numbers of those affected in Austria were–and are–alarmingly high. According to the 2014 survey, every fifth woman (20%) has experienced physical and / or sexual violence since the age of 15. Only 16% of the women surveyed reported their most severe (!) violent domestic experiences to the police. Only 5% know where to turn after experiencing domestic violence. In 2020 there were 9 murders of women and 13 attempted murders in Austria.

Equipped with a cardboard sign, flyers and lots of enthusiasm, we looked for a place on Maria-Theresien-Strasse to collect money for the Tyrolean women's shelter, but also to draw attention to the importance and social necessity of domestic violence protection facilities.

It was only the day before when the Tyrolean deputy governor (ÖVP) had insulted a WWF activist in front of the camera as a "disgusting slut", and thus was demonstrated the patriarchal and sexist social order in which Austria exists and which impressively publicly manifested the realities of life for many women.

We unpacked our instruments, and along with us for the first time, a soap bubble artist unpacked their bucket and soapy water. The street quickly transformed into a jumble of dancing people, soap bubbles and lively music. The crowd was interested and moved, for they donated more in two half-hour sets of playing than we could ever collect by laying out the hat for ourselves. It's great that there are so many people on the street and in our city who are committed to women's shelters and advocacy against domestic violence. 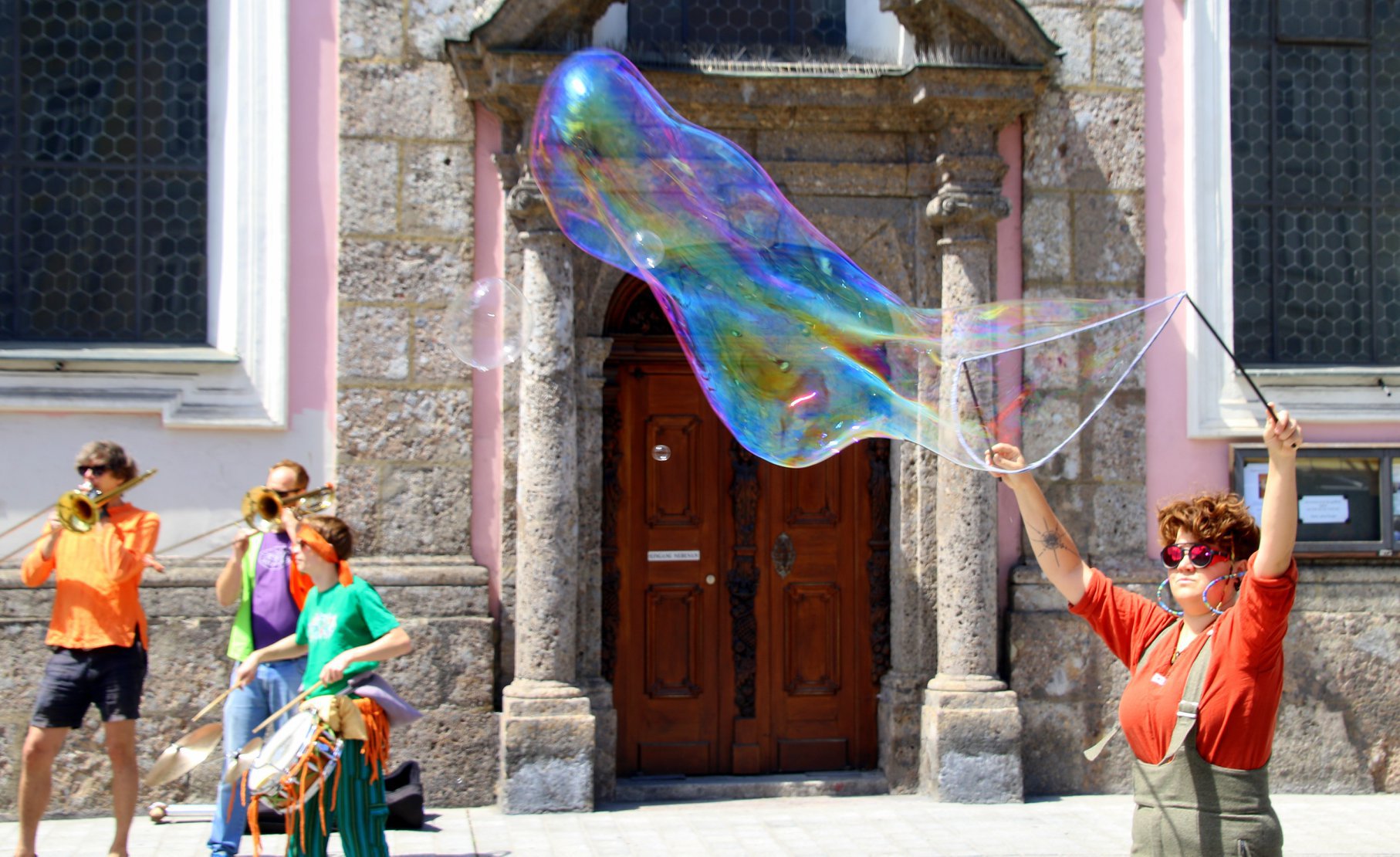 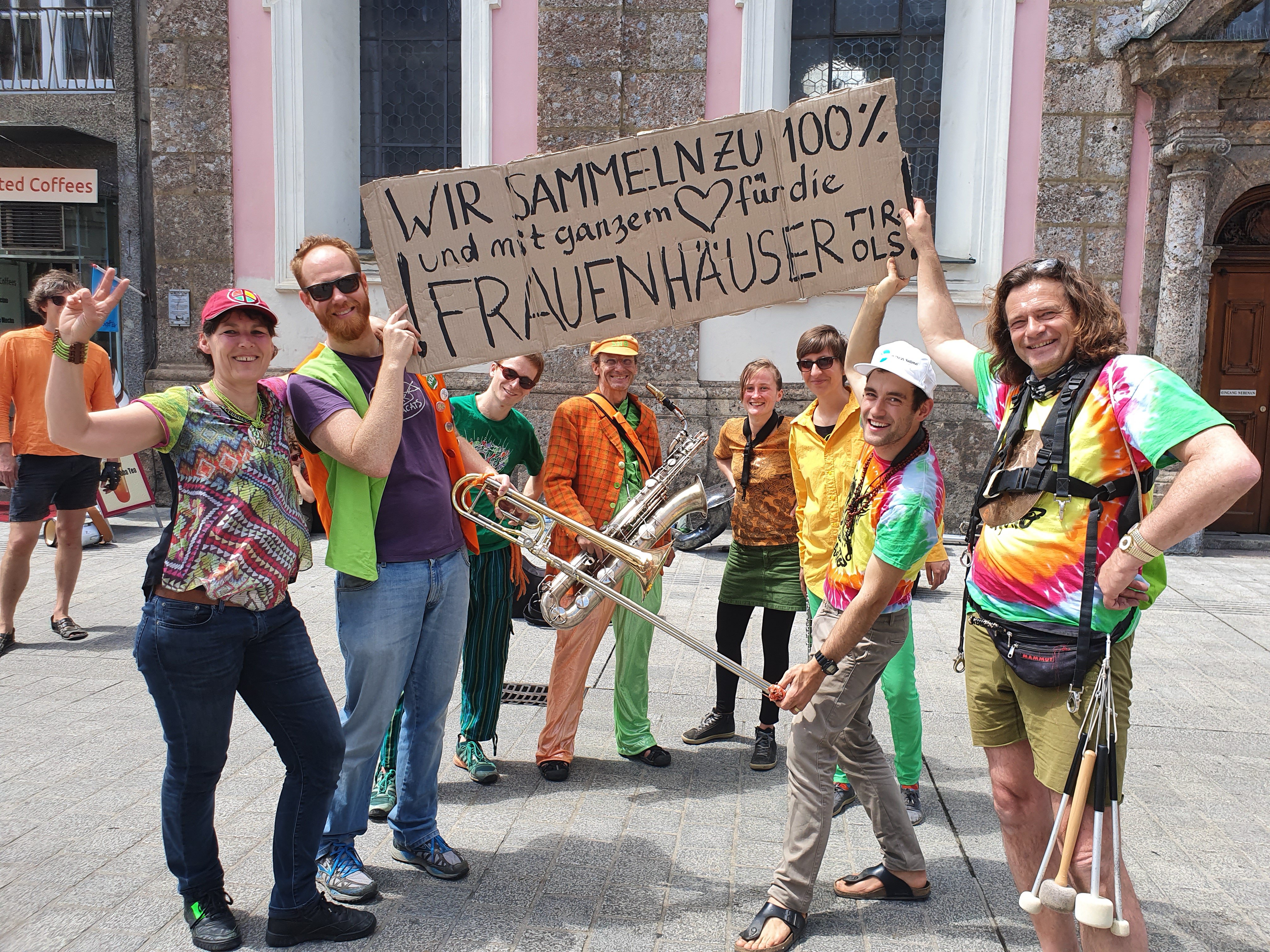 Music for a fairer world: We raise money for the Tyrol Women's shelter and raise awareness of gender-based violence.

Europe has a long history of amateur musicians picking up their loud, very loud, horns and drums to join the struggle against social injustices, and …

On February 1, 2020, we were thrilled to play at the wedding of our sousaphone player Markus and his new partner Julia, in Hall in …

Who is the StreetNoise Orchestra? What do they do, and why? What kind of music do they play? Do they improvise or do they have …